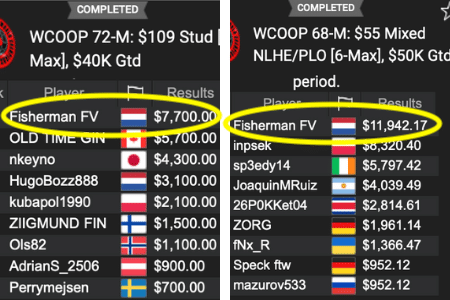 All the latest from the World Championship of Online Poker (WCOOP) on PokerStars, where double champions came thick and fast, including a spectacular single-night double. All the details…

Proof of a remarkable double

Incredible single-night double for Fisherman FV: We grow accustomed to seeing incredible achievements during the major series on PokerStars, but it still manages to amaze anew when a player wins two titles on the same night. It’s happened in SCOOP a few times, but it happened yesterday for what is believed to be the first time in WCOOP. The player in question was “Fisherman FV” of the Netherlands, a mixed game specialist who formerly came to our attention winning a second SCOOP title this spring. There were a few years between those two victories, but a matter of only three hours between Fisherman FV winning the WCOOP-68-M: $55 Mixed NLHE/PLO and then taking down #72-M: $109 Stud. There was a field of 1,571 in the former, in a tournament that played out over two days, and 329 entries in the latter, which went from start to finish in a single evening. For the same player to win both tournaments, defeating Poland’s “inpsek” heads up in the first and Matt “OLD TIME GIN” Stone in the second, is incredible. Two trophies, plus winner’s prizes of $11,942 and $7,700 are now heading to the Netherlands — and our most hearty congratulations (and a request for an interview).

Another one for Peterman

Peterman makes it two: In comparison with other renewals of WCOOP, the list of double champions this year was fairly short, if concentrated with incredible talent. It featured Dinesh “NastyMinder” Alt, Talal “raidalot” Shakerchi, Joao “Naza114” Vieira, Patrick “pads1161” Leonard, Pablo “Pablos701” Wesley and Belarmino “PaGaOVelhinho” de Souza. But three more names went on it on Tuesday, including “Fisherman FV”, discussed above, and Elliott “elliottpet” Peterman, who took down a second huge hold’em tournament of the series. Last week, Peterman bested the $5K buy-in WCOOP-42-H and last night he won WCOOP-67-H: a $1K buy-in PKO event. This time the field had 874 entries and Peterman’s $127,772 win included $64,117 in bounties. The final bounty belonged to “Fukuruku”, of Ukraine, who ended up second for the second time this series. Peterman, based in Costa Rica, has broken through in spectacular fashion this year. But we’re not done for double champs yet, because…

Huge double up for Silva: In terms of prize pool, the biggest tournament of the weekend was also the second biggest so far in this year’s WCOOP. It came in the $1,050 “medium” buy-in version of the Sunday Million event, where 1,930 entries meant they were playing for $1.93 million. When things were done and dusted on Tuesday night, three days after it started, we had a new double-champion for WCOOP 2021. Take a bow Eduardo “Eduardo850” Silva, who takes the tally for double champions this year to nine, three of whom are Brazilian. Silva has a documented $3.3 million in online tournament cashes, according to Pocket Fives, including the $65K he got for winning WCOOP-49-H, a $1,050 NLHE tournament last week. This victory was even bigger. He defeated another Brazilian “Guizãoo_” heads up to bank $224,375, including $100,413 in bounties. And he still has a few days left to try and make it three.

Second SM heartbreak for Naked:D as BarchWarHead wins war: In the Sunday Million proper, which had a $109 buy-in this week, and found its final table featured on the PokerStars live stream, Russia’s “BarchWarHead” beat Ukraine’s “Naked:D” heads up to win $110,875, including bounties. BarchWarHead either is, or shares a name with, a World of Warcraft Twitch streamer, but after striking a three-handed deal, which also included “VictorLsouza” of Brazil, there was only one winner of this war. The trio agreed a near even split of the main prize pool, which meant the final bounty was decisive, and Naked:D was beaten into second place for the second time in this WCOOP series. During WCOOP 2021’s first week, Naked:D arranged a heads up deal with “SoulOfaSwan” in the “medium” buy-in Sunday Million Special Edition, but finished second. The trophy has once again slipped through their fingers, but they have another $92K consolation. As for BarchWarHead, victory in a tournament with a $109 buy-in and a $1.872 million prize pool is going to buy a lot of add-ons for a growing Twitch stream. Look for a trophy lurking on a shelf behind him if this really is our guy.

Berggren defeats Schemion; WCOOP champ at last: There was a real clash of the titans at the end of the WCOOP-68-H, the $530 NLHE/PLO Mix, where Sweden’s Andreas “mrAndreeew” Berggren went heads up with Ole “wizowizo” Schemion for the title. Berggren has more than $15 million in documented online tournament cashes, including two SCOOP victories, but had mystifying never won a WCOOP title, having finished runner up at least three times. Schemion, on the other hand, won in WCOOP in 2018 among a laundry list of high-profile successes. This could have gone either way, but Berggren finally got the monkey off his back, beat Schemion, and picked up the maiden WCOOP trophy. It came with a cheque for $30,166, and perhaps unlocked the floodgates.

Supermassa1 amassing quite a collection: Finland’s “Supermassa1” won a second title of their career, picking up $10,516 for the win in the $55 PLO 6-Max. This time last year, the same player won the $109 Razz during WCOOP, so there’s another Finnish mixed-game specialist rolling off the production line. Other champs last night included “tubatalevski” of Bulgaria, who won the $109 NLHE PKO only a few days after coming second in the $109 Heads Up. also reaped the rewards of his persistence. The Irish player finished third in WCOOP-48-H (a $530 buy-in six-max freezeout) but returned to claim a win in WCOOP-69-H, which was another $530 buy-in NLHE tournament, but played seven to a table. That extra player was crucial. Kulev won $68,766.

More than 200 tournaments are now complete and we’re inching ever nearer the 1 million entries mark. Here’s how it stands going into Wednesday’s play:

Stats refer to completed tournaments only

A look at what’s happening in the events paused overnight:

Lex deep in Super Tuesday: All eyes will once again be turned to Lex Veldhuis tonight after the Dutch streamer made it through to the final day of the $2K buy-in Super Tuesday Special Edition. Make no mistake, this is a fantastic result already in one of the toughest tournaments on the PokerStars weekly schedule, turned up a notch by its inclusion in WCOOP. Veldhuis sits right in the middle of the 16 players who remain, from a 369-entry field, with $738K in the prize pool and $135K up top. Anatoly “NL_Profit” Filatov leads, looking for a second title this year, with Gavin “gavz101” Cochrane and Daniel “Oxota” Dvoress among those offering stiff competition. Can Lex do it? Watch along on Twitch from 1.05pm ET today.

Other Red Spades involved too: While Lex will likely claim most of the attention tonight, there are other prospects for PokerStars Ambassadors. Sam “SamSquid” Grafton sits in eighth, of 78 coming back, in the $215 buy-in Mini Super Tuesday, while Ben “Spraggy” Spragg is 33rd, of 47 still remaining, in the $1K NLHE 6-Max PKO. That one has a $629K prize pool, and Spraggy will be looking to add to his WCOOP haul after last year’s win.

Heroes aim for stud glory: Only the $1K buy-in level of the stud tournament is still in play, and that too is looking at a thrilling conclusion tonight. The final table is a who’s who of WCOOP and SCOOP mixed game specialists, including Jussi “calvin7v” Nevanlinna, Yuri “theNERDguy” Martins, Andrey “kroko-dill” Zaichenko and Benny “RunGodlike” Glaser. Canada’s “mistere3” leads the last eight.

You may have seen that Rafael “GM_VALTER” Moraes recently joined Team PokerStars Pro, and he found himself sitting next to Lex Veldhuis in the Super Tuesday last night. Lex extended his welcome in brutal fashion, with one of the grimmest beats you’ll see. With friends and teammates like these, who needs enemies?

The German player “renemastermix” has been riding high in the Player of the Series leader boards this year, particularly in “low” designation tournaments where he’s somehow managing to navigate enormous fields to consistently make the deep stages. According to this tweet, he’s now at his fourth final table of the series. I guess that explains it…

A customary hattrick of titles last night for players from Brazil put the Latin Americans on 37 titles for this series, the most ever for a single country in WCOOP. We’ve seen it coming for a long time, but it is a magnificent achievement. It is also far from over yet. Russia won another three titles too last night, putting clear distance between them and the UK, and posing the only even token threat to Brazil’s dominance.

PLAYER OF THE SERIES UPDATE

It’s all far too quiet in the overall Player of the Series race. Something dramatic is about to happen soon. For at least the third day running, there’s no change in the order of the top five, although Patrick Leonard’s lead is now only 30 points. Watch out. The twist is coming…

Read a full explanation of this year’s promotions.

It’s the variant that’s sweeping (well, swept) the poker world: 6+ hold’em, otherwise known as short deck. Usually it’s one for the high rollers, but you can play for as little as $5.50 tonight. There’s also a 5-Card NLO8 6-Max, which is again a variant for the excitable. Enjoy.

Live broadcasts of WCOOP 2021 go out every Monday through Wednesday featuring cards up coverage of the biggest final tables and expert commentary from James Hartigan, Joe Stapleton and a host of special guests. Click for full details.

Our friends at Poker News will be bringing you live updates from a number of events during WCOOP. Head to their Live Reporting pages to see the action unfold in real time.